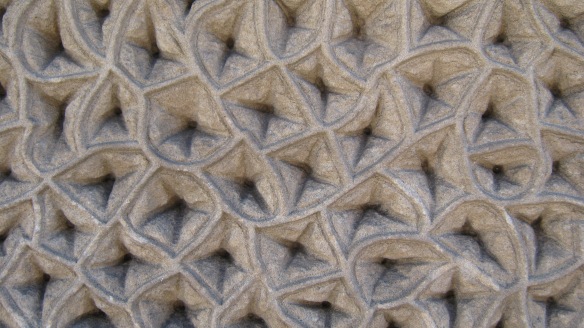 Anemone Stone, detail from a building in The Rocks, Sydney, taken at about shin height

Cities are such stimulating places to be. I have lived in old cities like Mumbai (then called Bombay) and Ahmedabad. I’ve toured Old Delhi and New Delhi a number of times (old and new co-existing) and visited the magnificent ‘City of Victory’ Fatepur Sikri, which has only an ‘ephemeral existence.’ And I’m very fond of the old parts of Sydney, as you can see from my photo that begins this post. I grew up in Sydney.

I live in Canberra now. I came here in 1987, and experienced the initial shock of living in a relatively new and designed city, and I’m still here and I love it. I’m smiling as I remember (back around 1983) standing in Connaught Place in New Delhi and feeling transported back to Australia for a moment as I looked around the arches and pilllars and dark corners which so reminded me of Canberra’s Melbourne and Sydney buildings. The only difference in the frame of my view were the red paan stains splattered on the white walls.

I’m looking forward to the coming exhibition Shaping Canberra: the lived experience of a changing landscape, at the School of Art Gallery, 17 September – 19 October 2013, and especially Jenni Kemarre Martiniello and Lea Collins and Mary Hutchinson’s works. Cities are always stimulating, being in them, thinking about them and interpreting them. I’m looking forward to the associated conference too and especially Cathy Hope,       Bethaney Turner and Sandra Burr’s papers on The Interface Between the Urban and the Rural.  I’ll be tweeting about the exhibition and conference @SSTVW.

I want to share a piece of writing on the subject of cities that has been published on-line before, but is now archived. Old City was first published on the ABC’s Pool under one of my pseudonyms – Hebe. It was part of a project called City Nights. I remember my need to be part of this project and the sense of accomplishment I felt as I uploaded my story.  I took the image for this post in The Rocks, which is part of the old city of Sydney, and the story was inspired by that beautiful old suburb, Glebe.

You stand at the stop light on the corner of St John’s Rd. It’s here you caught twenty dollars with your foot, stamping it down as the bitumen bit your bare sole. You can see it. You ate your luck; calamari and bread, pistachio and lemon gelato, and then drank it with verdicchio from a fish shaped bottle. The lights change and you cross the road. A man opens his coat, his grey cock pokes out. A baby pukes on its mother’s shoulder.

The old city is just the same. Thieves scatter their syringes in the night soil lanes. Keys enter locks on screen doors, on windows, and cars. Deadlocks shoot home. A woman does not let a lover enter her. He only touches her skin, she holds him outside. Barred windows. But some houses are open with parties that flow for years from weekend to weekend, friends and strangers in the front yard, and on the street. A man asks every woman at a party for a screw, figures he’s got a chance. Jesus opens his robe, his heart encased by thorns, in the picture in the hall.

You see yourself catching the bus at night, and walking home in the middle of the road in the street light. A young guy recognised you and offered you a “charge,” bottle outstretched, shifting his cardboard blanket. Bags heavy with old books, you wore second hand clothes, and slept in the front room. At night trucks sped down Bridge Road. You woke to the sweeping feet of the street sleepers, moving on, only a wall between you and them. Tree roots cracked footpaths. Tired gardens were heavy with blooms. You had gravestone sex, brushed away broken glass, the inscription pressed into your back. Pissing burnt as you squatted in the gutter. A poetry reading continued in the background, its best rhythm the clean click of billiards from a back room. You followed storytellers from cafe to cafe, and drank cheap bottomless cups.

Today you stand at the window of a shop that sells the mysticisms of the world, a woman with more than twenty dollars to spend by chance. As you lean against the cool glass of your reflection, the eyes of the girl who wandered the old city, watch you.