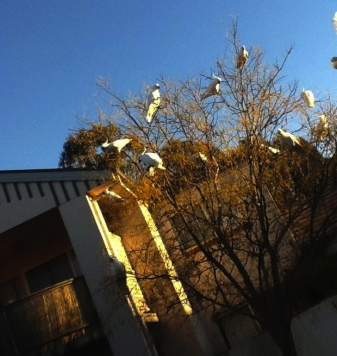 I saw Hitchcock’s ‘The  Birds’  last weekend at the Electric Palace as part of their Vintage Electric season. It was great to see a Hitchcock classic screened; there is nothing like the full cinema experience, that dark communion with a cinema audience. I glanced across at the uplifted faces aglow with film light, laughed with them in some of the wrong places (sorry Alfred), and relished the frisson of collective terror.

This time around I particularly noticed the soundscape, the caws and flaps overlaying the urban environment in the opening sequence and the birdy mise-en-scene. The optical effects stood up quite well. I was damn scared of those birds. I was terrified. Again. I always wonder how that can be, when I know a film quite well, that the tension and fear and excitement still rise so surely.

I was fascinated by the resemblance of Melanie to Mrs Brenner and the exploration of  mothering and female relationships. Can a guy really only love someone like his mum? Always double- edged (as with any Hitchcock film). If you haven’t seen it I don’t want to reveal who gets pecked to death ( oh my gosh would that happen) but I was interested (apart from the avenging Nature) how carefully and peacefully relationships and desires were worked through. Ex girlfriend of male love interest could talk with potential new girlfriend of male love interest quite frankly, in fact put her up for the night and maybe even lend her a toothbrush. Women vying for maternal roles work it out together albeit motivated by the potential end of human supremacy in their environment. Veronica Cartwright’s (iconic sci fi horror actress) performance as the young Cathy Brenner was spellbinding. (Her sister, Angela Cartwright, plays Brigitta in the Sound of Music, and Penny in the TV show, Lost in Space.)

An added bonus for this viewing was the brief conversation I had with the people behind me about the impending magpie swooping season in Canberra where the poor fellers with enlarged testicles just want to peck your head off. Clack. Clack. For those coming to Floriade from interstate you will understand why the denizens of the City of Circles wear spiky bike helmets and hats with eyes on them. You see groups of schoolchildren running outside of their schools – you’d swear they were in a scene from The Birds.

I also spied a family dressed in 1950s splendour. The man wore a green suit with green hat. (I hope he took his hat off in the cinema as we all know men’s hats should not be worn inside) and the woman wore a pill box hat and long silken jacket. The girl was berugged in a stylish poncho ( maybe not so 50s but still looked great) and I believe patent leather shoes.  I wonder if this family live their lives like this or if they dressed up for the movies?

Anyway, if you haven’t seen The Birds get it out or download it. Even better see if you can find it screening somewhere.

I’m so looking forward to Electric Palaces screening of Alien, my all time make me feel better movie. I just love watching Ripley’s professionalism and work ethic as those around her fail. For those in Canberra it is on at 3 pm on 15th September. In weeks to come they are showing Singin’ in the Rain, North by North West, Rear Window,  Gone with the Wind and Breakfast at Tiffany’ s. I’ll be getting out my long cigarette holder. (I wonder if they’ll let me smoke inside. 😉 Probably not.) 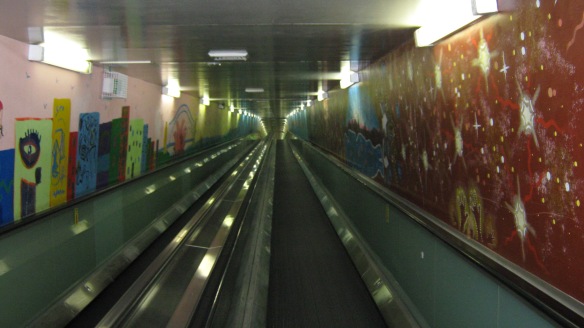 The Travelator, beneath Sydney

Originally this blog was about time and was called ‘this five minutes’. I wanted to capture peak moments, moments of acute emotion and observation, and I wanted to enjoy and share them through words. I tethered them in time and place, tying them to numbers on a clock and names on a map, and to markers of realities.

But even five minutes can be too unruly (it really can) and the Blog shuddered and quaked and quickly slipped into a chrono-synclastic infundibulum.

I blame WordPress. They should have built stronger sites.

The Blog tells me she saw The Sky Whale in there. (The Sky Whale had advice, but Blog won’t tell me what it was.) I pulled Blog out of the chrono-synclastic infundibulum and calmed her down. So I settled for a less flighty Blog about reading, writing, place AND time. That’s okay. Time has stopped winging away in all directions and has a few more friends to talk to, I hope. We’ll see how they get on.

I’ve been rereading quite a bit lately. (Don’t you love words that begin with ‘re’)? It’s like travelling into the past. (Calm down Blog, calm down.) I hope to be sharing some reading experiences here very soon, and some writing experiences. Looking forward to it. In the meantime I hope you enjoy this credit sequence from It’s About Time. (I pinched a phrase from the song for the title of this post.)